Why Does The Media Insist on Calling Porcelain Dolls Creepy? 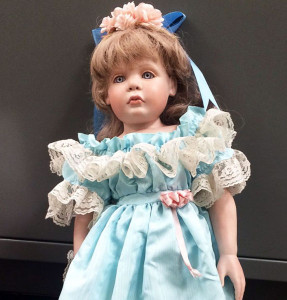 So, evidently some little old lady in Talega, California, left some porcelain dolls on porches as gifts for little girls in her area. This created a media firestorm all the way to the United Kingdom.  “Mystery ‘do-gooder’ causes panic by leaving sinister dolls resembling REAL young girls outside homes in gated California community” screams the Daily Mail. “10 ‘Creepy’ Porcelain Dolls Found On Doorsteps In OC Were Meant To Be Nice Gesture” says CBS Los Angeles.

I was interviewed on this great crisis this morning by Inside Edition.  Before the interview, I said I wasn’t interested in talking to them if they were just going to portray the whole episode as creepy. Oh no, they assured me. So, what was the first question the reporter asked me? “Isn’t this whole thing just a little bit creepy?”  Sigh.

All that happened was that an older lady decided to give away her doll collection. Most likely no one in her family was interested in them, and so she decided to leave them as gifts for little girls in her community.  If they were toy trains, or toy race cars, or games, people would have been curious, but they would not have, as Inside Edition says on their web site, “freaked out.”

I find it sad that the only time dolls are mentioned by mainstream media is when “creepy” can be discussed (well, unless it’s a Barbie Doll and then “sexy” can be discussed).  Don’t believe me? Last month, you could have read about “Welcome to doll island (if you dare): Secret shrine to little girl who drowned more than 50 years ago has become a creepy tourist attraction” Or, how about from just yesterday “Real-life doll house on sale in New York City… but it comes with two tenants and will STILL cost you $1.3million“.  That article doesn’t mention creepy-looking dolls until the third sentence at least.  Perhaps the Daily Mail has a Bureau of Creepy Dolls staffed with it’s own reporters?

In any event, these days images of Chucky rather than images of beautifully crafted 19th and early 20th century porcelain dolls are much more likely to fill the heads of younger reporters. And yes, getting an anonymous gift of any sort for a child can be disconcerting until the donor can be ascertained…but I still don’t get the immediate jump to “creepy,” “sinister,” and “freaked out.”  I think that little children from the late 1800s and early 1900s would look at little children today pressing little buttons on a tiny black screen for play instead of having a tea party with their dolls, and would be “freaked out” by that.

5 Responses to Why Does The Media Insist on Calling Porcelain Dolls Creepy?