I didn’t register for the UFDC convention until fairly recently, so when I arrived in Kansas City I had no special events on my schedule. So on Wednesday I stood on a line to get tickets to available events. I was happy to find out the Barbie doll dinner  had a few tickets left, and I signed up without knowing anything about the event.

Imagine my delighted surprise when I walked into the event tonight and found out that not only did the legendary Barbie doll designer Carol Spencer design the event souvenir, “Blue Skies”  Barbie (limited to only 100 pieces) but Ms. Spencer also was giving the program about Barbie’s early history and Ms. Spencer’s design history with Barbie over the years.  I learned some nuggets about Barbie’s history that I didn’t know–for instance, I learned that Barbie clothing designer Charlotte Johnson spent over a year at The Imperial Hotel in Tokyo working with Japanese designers and seamstresses on Barbie’s very first wardrobe. Coincidentally, I stayed for a few days at the Imperial Hotel in April (same location, but sadly not the original Frank Lloyd Wright structure). I also learned that Carol Spencer designed the number one selling Barbie of all time, Totally Hair Barbie. 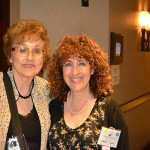 Carol Spencer recently donated many Barbie dolls as well as prototypes, sample dolls, and historical documents to the UFDC museum which I visited yesterday; several cases in the museum showcase some of this wonderful and historic Barbie collection. The museum is open to the public and available to anyone who wants to see the exhibit.

Oh, and if you are interested in our very lovely event Barbie I’ve included a photograph of “Blue Skies,” a vintage reproduction Barbie in an ensemble inspired by one of Carol’s own teen designs (she designed for people before she designed for dolls).